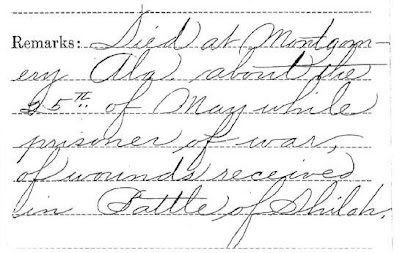 As I have mentioned in previous posts and in the Preface of my book, Notre Dame in the Civil War: Marching Onward to Victory (

The History Press, 2010), I have a long-term goal of cataloging and researching Notre Dame's Civil War student-soldiers.

My previous student-soldier profiles are listed below:

There are many more profiles to come.

A brief capsule biography and selected images from his compiled military service record are below.

John C. Lonergan was a native of Batavia, Illinois. He attended Notre Dame from 1855 to 1857 and again from 1859 to 1861, where—among other activities and studies—he was vice-president of the Dramatic Society. Lonergan mustered in with the 58th Illinois Infantry as a first lieutenant in Company H on February 7, 1862, only days before the regiment shipped out for Fort Donelson. He was wounded and captured during the Battle of Shiloh on April 6, 1862, and taken to Montgomery, Alabama, where he was kept a prisoner until he died of his wounds on May 28, 1862. May he rest in peace.

Note in the images below from his service record that Lonergan's commander was Col. William F. Lynch. Lynch was also a Notre Dame student and will be featured in a future profile.

You can learn more about Notre Dame's brave student-soldiers in Notre Dame and the Civil War: Marching Onward to Victory. 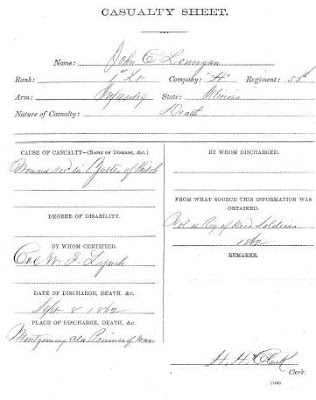