Another "Golden Domer" is also a Johnny Reb! 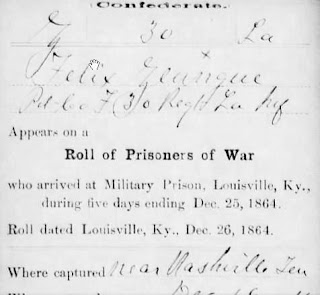 I have posted before (Part I here, Part II here) about Michael Quinlan - a University of Notre Dame student who enlisted with the Confederacy.

It looks like I found another one: Felix Zeringue - a native of Orleans Parish - who fought with the 30th Louisiana Infantry!

Between footnote.com (where I accessed his compiled service record) and the great folks at the University of Notre Dame Archives, I have some great info:

Felix Zeringue of New Orleans, Louisiana:
I've also got a letter into the Research Library of the Louisiana Secretary of State's Office...they have a great Confederate pension application database, in which Felix is listed...perhaps there is more there!

You'll be able to read about Michael Quinlan and Felix Zeringue - and dozens of boys who enlisted with the Union army - in my forthcoming book, Notre Dame and the Civil War: Marching Onward to Victory (The History Press, Fall 2010)!
Posted by Jim Schmidt at 5:26 PM No comments: