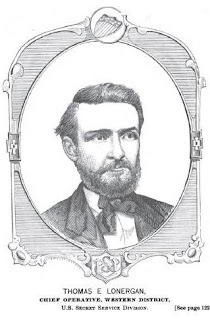 As noted in a previous post, I am trying to catalog the students, graduates, and even future students of Notre Dame who served during the American Civil War.
My strategy is to:
1) Look at the Notre Dame catalogs just before and during the war
2) Identify students whose studies ended upon the start - or shortly thereafter - of the war
3) Confirm whether they might have been a soldier using the National Park Service Civil War Soldier and Sailor System
4) Find other confirmation (state muster rolls, etc.) to match muster-in hometwon with Notre Dame catalog information
5) Verify further with any other biographical information to connect the soldier to Notre Dame
6) Final confirmation (if needed) by securing pension, military record, and enrollment details
I'm pleased that this very strategy paid off handsomely this week such that I can add another soldier - Thomas E. Lonergan - to the "Roll of Honor"!
You can follow my genealogical detective work below! (screenshots from the various sources are within and at the end of this post).
1) First, I started by looking at Notre Dame students from Illinois; the 1861-62 Notre Dame catalog includes several, including a "Thomas Lonergan" from Lockport, IL.

2) Next, I used the excellent University of Notre Dame Archives "Student Index 1849-1912" to make sure that Lonergan did not stay in school through the war. In fact, he left school after the 1861-62 school year. 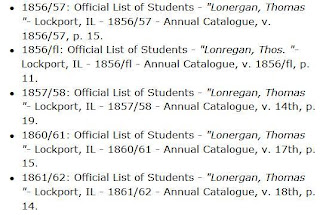 3) Next I used the NPS Civil War Soldiers and Sailors System to see if there were any soldiers named "Thomas Lonergan" (I narrowed it down to Illinois). There was, in fact, a Thomas E. Lonergan with the 90th Illinois.

4) Next I used the excellent "Illinois Civil War Muster Roll Database" to see if there were any enlistment details that would correspond to Notre Dame's Thomas Lonergan, minimally his hometown. Indeed, the Thomas Lonergan muster roll informations hows him enlisting in the summer of 1862 (corresponding to his leaving Notre Dame) and his hometown as Lockport, IL. Note that he was discharged because of a wound suffered at Missionary Ridge in late 1863.

5) This is encouraging, but it would be even better to have some more concrete to tie Thomas Lonergan to Notre Dame. I did some Google searches and really hit some great material. The best was an 1879 book entitled American Counterfeits: How Detected and How Avoided, which included an amazing capsule biography of Lonergan (he joined the U.S. Secret Service after leaving the army) that confirmed all of these details and it also included a portrait of Lonergan! I also found an NY Times obituary. 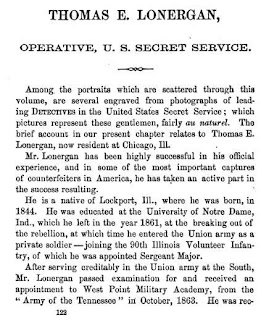 6) Icing on the cake will be securing his military and pension records and additional enrollment details, but that's for later!
This is a longterm project and obviously not all of my Notre Dame student-soldier searches are going to be this straightforward but there's no doubt that many of them will be this enjoyable!
You'll get to learn more about Thomas Lonergan and other Notre Dame student-soldiers in my forthcoming book, Notre Dame in the Civil War: Marching Onward to Victory (The History Press, 2010/2011)!
Additional Screenshots:
1) Notre Dame Catalog 1861-62 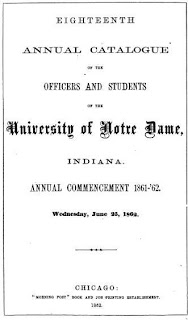 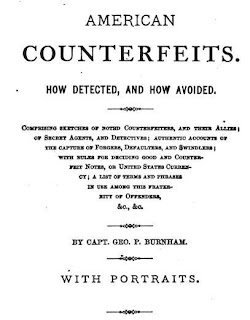 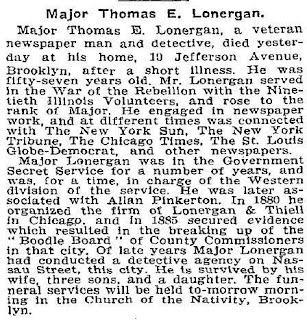 There have been some excellent recent studies that catalog and give biographical sketches of student-soldiers from various universities. Among the most recent include:

A good number of Notre Dame men left school to fight in the Civil War and some previous graduates did as well. Unfortunately, while Notre Dame did an outstanding job of preserving the history of the important contributions of Holy Cross priest and sisters who served as chaplains and nurses during the war, there is not a good comprehensive record of all the student-soldiers.

There are some threads of stories in late 19th-century issues of the school magazine, the Notre Dame Scholastic and does appear from some correspondence I have seen from the Notre Dame Archives that an effort was made in the late 1890s to track down the names, but even those efforts seemed to yield less than a dozen names of what are supposed to be many dozens more who actually went.

Fortunately, the University did a wonderful job of preserving their patriotic record in later wars.

I am building a database of names of Notre Dame's Civil War student-soldiers that I do know, and have the supporting documentation noted elsewhere. Some of these fellows have already been featured on this blog and many more of them will be.

If you know of Notre Dame students who fought in the Civil War not listed here, please drop me a line!

A good roster of the members of the "Continental Cadets," Notre Dame's pre-war military company, would be of great help, but we have not been able to find one yet.

Presently, I am also going through the 1861 Notre Dame catalog to find students who did not attend in 1862-65, then doing a "Civil War Soldiers and Sailors System" search to see if they are on a regimental muster roll and using that as a starting point (only) to identify possible additional student-soldiers. Absolute verification would require an extensive look at Compiled Military Service Records, pension records, census records, Notre Dame enrollment records, etc., but a comprehensive Notre Dame Civil War "Roll of Honor" would be a great contribution to the brave men and to the university.

Any other advice would be greatly appreciated!
Posted by Jim Schmidt at 4:57 PM No comments: