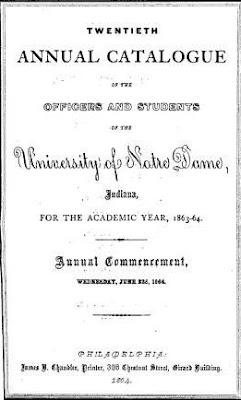 I got several answers for the quiz in the last post about holiday's during the school year at Notre Dame via the comments section and via my page on Facebook, but only one of them was right:

Congratulations to Robert Redd for the correct answer: St. Patrick's Day was NOT a school holiday at Notre Dame in the Civil War (and not since its founding and not until a decade after the war!)

I'll contact Robert directly about his prize. Robert also maintains some great blogs, including Confederate Book Review, so check it out!

In this post are are photos from Notre Dame's 1863-64 annual catalogue. St. Edward's Day was celebrated as it was the patron saint of the school's founder, Fr. Edward Sorin; Easter Monday as a one-day respite from the Easter holiday, perhaps to allow some students a chance to return to school from a short holiday at home.

Washington's Birthday was always a special day at the University of Notre Dame; Fr. Edward Sorin admired him very much and he also felt that by celebrating the day he could change the minds of people who were suspicious of the allegiance and patriotism of American Catholics. 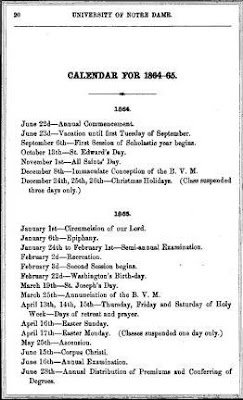 As for St. Patrick's Day: while the student population at Notre Dame had taken on a decidely Irish character by the time of the Civil War, the school was in fact founded by a French contingent, led by Fr. Sorin. A humorous episode recounted in Notre Dame's centennial history explains more:

Father Sorin, in the interest of Americanism, once forbade any special celebration of St. Patrick's Day. In particular he announced that there should be no "wearing of the green." Two young novices, Dave O'Leary and John Quinn, were so aroused by this "unjust" order that they went to the chapel, extracted the green ribbon from the missal, cut it in two, pinned it on their surplices, and marched into the sanctuary. For this act of disobedience they were promptly expelled. Father Sorin, reflecting on his hasty action, sent some one running to the Novitiate, telling the boys they might remain. O'Leary did stay on. But Quinn said: "By gum! I've been fired! And I'll not stay!" Years later, Quinn returned, a fine priest and a noble Monsignor, to deliver the baccalaureate sermon, in what was interpreted as a vindication of the "Irish Rebellion."

Congratulations to Robert and stay tuned for more information about Notre Dame in the Civil War!
Posted by Jim Schmidt at 9:36 AM No comments: 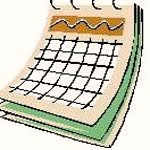 Here's a quiz for you! Which of these was not a school holiday for University of Notre Dame students during the Civil War era (and for several years before and after)? The first person who leaves the right answer in the comments section wins a prize! I'll announce the winner later this week! Good luck!
Posted by Jim Schmidt at 5:15 PM 2 comments: 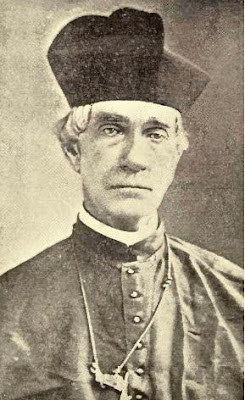 More profiles of other Notre Dame chaplains are coming!
Posted by Jim Schmidt at 6:58 PM 1 comment:

Above and Beyond the Call of Duty - A Notre Dame Medal of Honor Recipient! 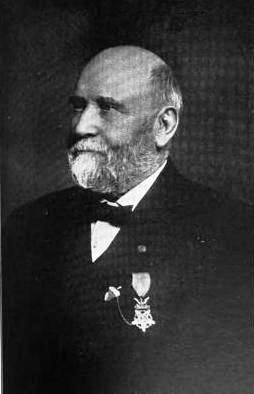 One of the more notable Notre Dame student-soldiers that I will feature in Notre Dame in the Civil War: Marching Onward to Victory (The History Press, 2010) is Orville T. Chamberlain.

Orville Tryon Chamberlain was born at Leesburg, Indiana, September 1, 1841, The family moved to Elkhart, IN, when he was two years old. He attended local schools and as a teen he clerked in his father's drug store, learned the printer's trade, and taught school for three winters at the Bunker Hill school house, near Elkhart. Orville entered Notre Dame University in 1860, attaended until 1862, and graduated from the Commercial Department as "Master of Accounts."

On August 6, 1862, he became a private in Company G, 74th Regiment, Indiana Volunteer Infantry; henwas made orderly sergeant and afterwards successively promoted to 2d Lieutenant, 1st Lieutenant and then Captain of his company.

Chamberlain earned the Medal of Honor (March 11, 1896) for his actions at the Battle of Chickamauga on September 20, 1863. His official citation reads:

"While exposed to a galling fire, went in search of another regiment, found its location, procured ammunition from the men thereof, and returned with the ammunition to his own company."

As with many such citations, the simplicity of the wording belies the heroism exhibited in the actual event. The Wright-Chamberlain Genealogy (1914) gives a much more detailed (and exciting!) version of the circumstances. I'm also trying to get the papers associated with his Medal of Honor file at the National Archives.

After the war, he intended to make a career as a soldier and secured a commission as an officer in th eregular army; however, the very day he received the commission, his father passed away and Orville returned home to Elkhart, where he became a distinguished attorney. 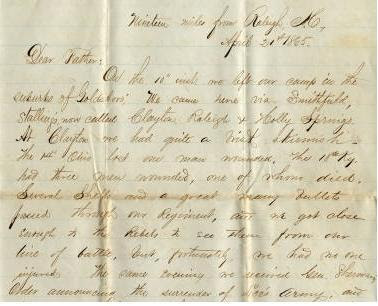 To learn more about Chamberlain, we fortunately have access to a wonderful set of Chamberlain Family Papers at the Indiana Historical Society (IHS). By using the excellent finding aid, I was able to obtain copies of Orville's wartime correspondence. It includes a wonderful letter written from Notre Dame on the day of Lincoln's inaugaration and ends with an equally wonderful letter four years later upon the surrender of Confederate forces to Sherman. Indeed, the IHS has made that final letter available here.

I have also received some excellent assistance from Dave Powell, an expert on the Battle of Chickamauga, and author of the recent (and excellent!) The Maps of Chickamauga. Dave kindly provided copies of correspondence between Chamberlain and battlefield monument authorities on the actions of the 74th Indiana during the battle. (Thanks, Dave!)

As it turns out, Orville also had some Notre Dame classmates in the 74th Indiana! Chamberlain is only one of many student-soldiers at Notre Dame who did their duty, but his is a well-documented case and will be a highlight of the book!
Posted by Jim Schmidt at 5:22 PM 2 comments: