I'm pleased to announce that The Civil War News published a very kind review of my third book, Notre Dame and the Civil War: Marching Onward to Victory (The History Press, 2010). 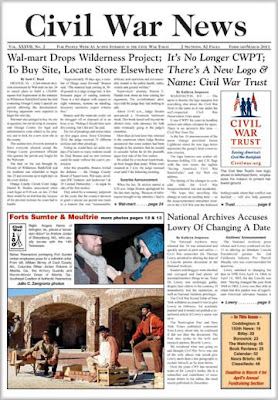 The review was penned by Mr. John Foskett - a Boston attorney, Notre Dame graduate ('73), and Civil War enthusiast - in the Feb/March 2011 issue, which is now in subscribers' hands! Many thanks to Mr. Foskett and Civil War News!
As with the Civil War News reviews of my previous, books Lincoln's Labels: America's Best Known Brands and the Civil War (Edinborough Press, 2008) and Years of Change and Suffering: Modern Perspectives on Civil War Medicine (Edinborough Press, 2009), this review of Notre Dame and the Civil War is special because Civil War News is where I got my writing "bona fides," as I've penned the "Medical Department" column on a regular basis since 2000. CWN editor/publisher Kay Jorgensen (and her late husband, Pete) has been extremely supportive of my writing and research efforts over the years, which I appreciate very much, indeed.
If you don't subscribe to Civil War News, you should! You can learn how to get a sample issue (here).

The full review is (here) and excerpts are below!

"...James Schmidt has done extensive research in the Indiana school’s archives and has produced a short book that documents Notre Dame’s generally unknown and extraordinary contribution to the Northern war effort despite its still-fledgling status after its 1842 founding.

...a worthwhile portrait of the committed role played by a Northern college in the Civil War...

This is a unique addition to the growing body of literature about contributions to the war effort by educational institutions such as Harvard and Yale. Not many were as deeply immersed as Notre Dame, and this book makes that point in a highly readable fashion."

Read more reviews of Notre Dame and the Civil War: