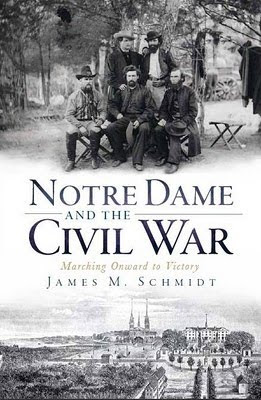 I want to thank Patrick McNamara for posting a very kind review (here) of Notre Dame and the Civil War: Marching Onward to Victory (The History Press, 2010) on his popular "Musings of a Catholic Church Historian from Queens, New York" blog this week, just in time for St. Patrick's Day!

As I've mentioned before, one thing I was aiming for in this book was to craft a story (backed by good scholarship) that would appeal to multiple audiences: Civil War enthusiasts, Notre Dame almuni ("bona fide" and "subway), folks interested in the history of the Irish and Catholics in America, and more. As it turns out, Patrick can count himself among several of those intended audiences, and I am so pleased, honored, and humbled that he found merit in the book!

If you have a history blog yourself, check out his blog (here) and consider adding it to your blog roll (I did at my Civil War Medicine blog!)...it's TERRIFIC!

Indeed, Patrick brings some impressive bona fides to his blogging on the history of the Irish and Catholics in American History; from his biography at Patheos.com

Pat received his Ph.D. from Catholic University of American in Washington, D.C. A native of Queens, New York, Dr. Pat McNamara has attended Catholic schools from grammar through grad school and has taught Church History at St. Joseph's Seminary, Dunwoodie, and at Immaculate Conception Seminary, Huntington. His books include A Catholic Cold War: Edmund A. Walsh, S.J., and the Politics of American Anticommunism (2005); The Tablet: The First Hundred Years (2008); and Diocese of Immigrants: The Brooklyn Catholic Experience, 1853-2003 (2004). Pat has appeared in numerous publications, writing on American Catholic history. Pat was an archivist for the Brooklyn Diocese for ten years, and in 2008 was a consultant for the Museum of the City of New York's exhibit Catholics in New York.

You can read the entire review (here). Excerpts are below:

In his wonderful new book Notre Dame and the Civil War, James M. Schmidt tells the whole story of the university’s involvement in the Civil War, and it’s a great story. It covers the priest who served as army chaplains, the Sisters who served as nurses, and the students who fought in the field...

This book is concise and well written. The research is top-notch, and the photos and drawings are wonderful. I learned much I didn’t know...As the first detailed study of American Catholics and the Civil War, this is an important book.

But, perhaps more importantly, it’s an enjoyable book. Anyone with an interest in the Civil War, Irish American history, and the story of Catholics in America is going to love it. Notre Dame alumni will be especially interested. The arrival of St. Patrick’s Day, and with the Civil War sesquicentennial only a month away, makes this the perfect opportunity to purchase this great book, either for others or yourself.