I have written on this blog about several aspects of Notre Dame's contributions and experiences during the Civil War, including the Holy Cross priests that served as chaplains, the students who served as soldiers, and life on campus.
Another interesting and essential part of the story is that of the Holy Cross sisters from Notre Dame and its sister-school, St. Mary's Academy, who served as nurses. 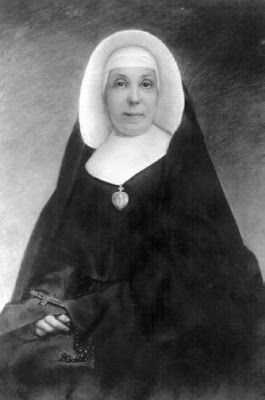 Just as Father Sorin proved to be a steady and inspiring influence to the students and Holy Cross priests and brothers at Notre Dame, so too did the Holy Cross sisters and St. Mary’s have an equally influential figure in Mother Angela Gillespie. Born in 1824 in Pennsylvania, Eliza Marie Gillespie was the daughter of a wealthy and prominent family. Her kin included brother Neal (Notre Dame’s first graduate) and the politically connected Ewing family of Ohio.
Eliza finished her early schooling in Washington, D.C. Beautiful,vivacious and energetic, she might have become politically connected and powerful herself through marriage, but instead she pursued a religious vocation and joined the Sisters of the Holy Cross in 1853, taking the name Sister Angela. In addition to her piety and charity, Sister Angela also had considerable business and executive talents, having managed her stepfather’s farm. Father Sorin thought her the ideal candidate to be superior of St. Mary’s Academy, a position that she assumed in 1855.
The call for the Holy Cross sisters to serve as nurses came on the eveningof October 21, 1861, when a horseman galloped to the campus of Notre Dame carrying an urgent request for Father Sorin. Sorin read the message to himself and then, by the light of his lantern, walked over to St. Mary’s Academy. Once there, he asked for Mother Angela and read her the message. Within hours, she and five companions were bound bytrain for southern Illinois.
Mother Angela and her “little army” arrived in Cairo, Illinois, where they reported to General Ulysses S. Grant, who had his headquarters in the city. One of the sisters remembered meeting the famous general:
"[He] shook hands most heartily with each Sister. Over the hand of Mother Angela he bent with the chivalry of a soldier worthy of leading a host to victory. Looking at his visitor with a kindly smile, he said:“Mother Angela, I am very glad indeed to have you and your Sisters with us.”…[T]he general asked Mother Angela if she and her companion nurses could be ready to report for duty that night at the military hospital in Paducah [Kentucky]…[She replied] that he had but to express a wish and it would be obeyed at once."
The sisters left right away and arrived in Paducah that evening, where they met General Lew Wallace (whose request for sister-nurses had prompted the governor’s message to Father Sorin), who commanded a brigade and its three hospitals in the area. The surgeons were characteristically dubious of having women in their wards, but they were soon impressed with Mother Angela. She reorganized the wards “with almost military precision,” and the sisters scrubbed the floors free of blood, put fresh linen on the beds, bathed the sick and prepared an appetizing and nutritious diet in the kitchen.
In mid-December 1861, Mother Angela returned to St. Mary’s to gather another group of sisters.
One of the sisters remembered Mother Angela assisting a surgeon at the Mound City hospital:
"Mother Angela was assisting Doctor Franklin with a difficult operation, the precise accuracy of which would determine the life or death of a soldier. A little chloroform had to suffice to dull the agony of the probing. Both surgeon and assistant leaned intently over the patient. Suddenly a red drop fell on Mother Angela’s white coif. Another and still another fell until a small stream was seeping through the ceiling. But true to her Celtic ancestry Mother Angela remained motionless, with thoughts concentrated on the delicate surgery. At last the final stitch was taken; two heads rose simultaneously. Not until then did the doctor realize that a crimson rivulet from the floor above had fallen steadily upon our Mother’s devoted head, bathing coif, face, and shoulders in blood."
Over the course of the war, Mother Angela might be found scrubbing floors or assisting in surgery as desribed above, but even behind the scenes Mother Angela was exercising her considerable influence and executive abilities by placing trusted subordinates in charge of other hospitals and writing friends, strangers, officers and politicians for supplies. Perhaps, though, it was her example of confidence and humility that did the most good:
“There are some people who can inspire others to do what ordinarily speaking is impossible; Mother Angela was one of these,” one sister wrote. “Her faith and courage never recognized limitations; hence the nature, the magnitude of her achievements and those of her Sisters.”
You can read more about Mother Angela and the other Holy Cross sister-nurses in Notre Dame and the Civil War: Marching Onward to Victory (The History Press, 2010).
Posted by Jim Schmidt at 10:14 AM