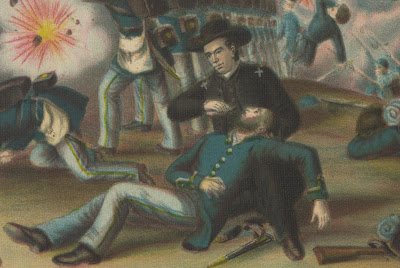 The University of Notre Dame was represented in a chaplain and student-soldiers at the battle. Below is an excerpt from my book, Notre Dame and the Civil War: Marching Onward to Victory (The History Press, 2010), describing the valor of Fr. Peter P. Cooney in the battle. You can learn more about Fr. Cooney in a previous blog post (here).

Look for another excerpt this week about a Notre Dame student-soldier killed in the battle.

Fighting began in earnest for the 35th Indiana on the very last day of 1862. “I am safe after being through the most terrible battle of the war,” Father Cooney began a letter to his brother, adding, “I have time now to write you but a few words…My time now is very precious attending to the dying and wounded.” The battle was a terrible engagement, indeed; of all the major battles of the war, Stones River was distinguished by having the highest percentage of casualties among the forces engaged on both sides.

The 35th Indiana was involved all three days of the battle, including skirmishing on the first two days and severe fighting on the third, within just yards of the determined enemy. “We lost of our regiment, killed on the field twenty-eight and wounded sixty-seven many of whom are since dead,”“And nothing but God’s protection could have saved me,” he added, “as I was in the midst of it the whole time.” Father Cooney continued. This was no idle boast. Colonel B.F. Mullen, commanding the 35th Indiana, mentioned the brave priest in his official report:

To Father Cooney, our chaplain, too much praise cannot be given. Indifferent as to himself, he was deeply solicitous for the temporal and spiritual welfare of us all. On the field he was cool and indifferent to danger, and in the name of the regiment, I thank him for his kindness and laborious attention to the dead and dying.
It was only the first of several official mentions of bravery that Father Cooney would earn over the course of the war.
Posted by Jim Schmidt at 10:40 AM