Below is an excerpt from my book, Notre Dame and the Civil War: Marching Onward to Victory (The History Press, 2010) describing some of the life and ministry of Fr. Joseph C. Carrier, CSC, as a chaplain in the Union army.
Genius, Interrupted 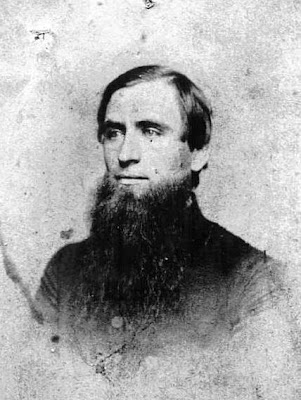 Father Joseph C. Carrier was born in France in 1833, the youngest of ten children in a respected and wealthy family. He received his earlyeducation under the care of a private tutor before attending the College of Belley, where he excelled in all of his studies but especially in science and mathematics. Indeed, while only in his late teens, he was appointed professor of natural philosophy (physics) at a small college in Geneva,Switzerland. In 1855, he came to America and decided to enter the priesthood. His patron—the bishop of St. Paul, Minnesota—had high hopes for establishing a religious order and college in his part of the country and thought that the young scholar would be an ideal choice to lead both.

Unfortunately, the bishop died before he or his protégé could act on the plan. Instead, Carrier entered the Holy Cross community at Notre Dame, where he was ordained a priest in early 1861. In May 1863, Father Carrier was serving as a professor of Latin and Greek at the university, as well as a pastor of the church in nearby South Bend, when Father Sorin told him to be ready to leave at a moment’s notice to join General Ulysses S. Grant’s army as a chaplain. Within days, Father Carrier bid farewell to his students and parishioners and set out for Mississippi, where he was commissioned as chaplain of the 6th Missouri Infantry Regiment. In fact,his ministry extended to all of Grant’s army.

By all accounts, Father Carrier was as comfortable among the leading generals of the army as he was among the common soldier. When he met Grant for the first time, the general asked if he was a professor. “Yes,” Father Carrier replied, “I have been years in the college of Notre Dameand am still attached to it.” The general then declared, “You will find that the life of a soldier is quite different from that of a professor and that our tents are not so comfortable as the halls of a college.” The good priest replied, “I understood that before I left Notre Dame, I did not expect to find in the soldiers’ camp all the comforts, the conveniences,and ease of home.” Grant expressed his happiness that Father Carrier had joined his army, and the two men then discussed the progress of the siege at Vicksburg.

While all of Notre Dame’s priests may have steeled themselves for the vagaries of camp life, they must have been less prepared for the constant threat and presence of death. The bookish Father Carrier seemed to be the most sensitive to this grim reality. In advance of the great “Vicksburg mine” explosion on June 25, 1863, Father Carrier witnessed a Union soldier being killed by a Confederate sniper. Father Carrier was “much moved by the terrible sudden…death of the soldier” and “sat at the foot of the tree.” Rather than watch the historic detonation, as his fellow officers were doing, Father Carrier “fell into a deep and irrepressible reverie,” left the scene, went back to camp “and threw himself on hiscot.” To his credit, Father Carrier returned to the lines and ministered to some of the soldiers wounded in the post-explosion charge.

Before the end of the year, Father Carrier was called back to Notre Dame, where he began to place the school’s scientific program on a firm foundation. In 1866, he spent several months in Paris collecting laboratory apparatus and specimens for the university’s museum of natural history.His greatest coup was securing a six-inch telescope as a gift from Emperor Napoleon III. Father Carrier was the longtime curator of the museum and professor of chemistry and physics. He was eventually assigned as a professor at St. Laurent College, near Montreal, and expertly tended themuseum there until his death in 1904.

Learn more about the good Fr. Carrier - including his letter to President Abraham Lincoln and his ministry to the Sherman family in Notre Dame and the Civil War: Marching Onward to Victory!
Posted by Jim Schmidt at 2:32 PM