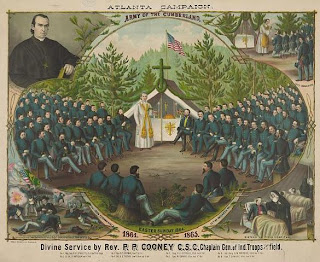 I'm pleased to add another installment introducing the Holy Cross priests from the University of Notre Dame who served as chaplains in the Civil War.
See this post for Chaplain #1, Fr. Paul E. Gillen
Below I describe the life and contributions of Fr. Peter P. Cooney. I know most people are more familiar with Notre Dame's Fr. Corby - and with good reason - but I have to say, Fr. Cooney is my personal favorite among all of the Holy Cross priests from Notre Dame who served as army chaplains during the Civil War. The fact is, though, they were all good men!
Fr. Peter P. Cooney was born in 1822 in County Roscommon, Ireland. When he was five years old, his family came to the United States and settled near Monroe, Michigan, where he attended the local public schools. Peter Cooney was almost thirty years old when he came to Notre Dame as a student in 1850. After graduation, he taught for some time at a country school. He then decided he was called to the priesthood and rejoined the Holy Cross community at Notre Dame, where he was ordained in 1859. His first appointment was at the University of St. Mary’s of the Lake near Chicago, then under the direction of the Congregation of Holy Cross.
Fr. Cooney was set to join other priests in mission work across the United States when the Civil War broke out. In the fall of 1861, Governor Oliver P. Morton asked Fr. Sorin for priests to minister to the Catholics in the regiments that Indiana was sending to the rapidly growing Union armies, and Fr. Cooney was eager to go and was appointed chaplain to the 35th Indiana Volunteer Infantry – also known as the state’s “First Irish” regiment - in October 1861.
Soon after joining his regiment, Fr. Cooney began writing letters, mainly to his brother, Owen, at home in Michigan. Fortunately, those wartime letters have survived. They give wonderful firsthand testimony to his activities as a chaplain, the role his regiment played in some major battles of the war, and the character – especially the religious habits – of some important military personalities of the war, especially General William Rosecrans.
The original letters and his other papers are held by the Archives of the University of Notre Dame. Some of the letters were published by Thomas McElroy in three parts as “The War Letters of Father Peter Paul Cooney of the Congregation of the Holy Cross,” Records of the American Catholic Historical Society of Philadelphia, 1933. The archives also maintains his wartime diary.
Fr. Cooney and the 35th Indiana did not see significant action until very late in 1862, but when they did, the men – and their chaplain – were in the thick of it. Indeed, Fr. Cooney is mentioned several times in reports the Official Records for his bravery under fire, including:
The Battle of Stones River:
"To Father Cooney, our chaplain, too much praise cannot be given. Indifferent as to himself, he was deeply solicitous for the temporal comfort and spiritual welfare of us all. On the field he was cool and indifferent to danger, and in the name of the regiment I thank him for his kindness and laborious attention to the dead and dying."
The Battle of Franklin:
"Of Father Cooney, chaplain of the Thirty-fifth Indiana, I commend him as an example of the army chaplain; meek, pious, and brave as a lion, he worked with his brave regiment in the valley of the shadow of death, affording the ministrations of his holy religion to the wounded - and dying, and giving words of encouragement to his fellow soldiers."
The soldiers in the 35th Indiana adored Fr. Cooney. A typical story of that fondness can be found in the wartime book, Indiana's Roll of Honor (1864):
"To say that he is much respected by the men of the regiment, is saying too little; he is loved by them. To illustrate this we will relate an incident:
Around a blazing camp fire sat a few comrades smoking their "dudgheens," (short pipes) and discussing strategy with all the intensity of Irish controversialists. Father Cooney came hurriedly along, evidently bent on a visit to some sick soldier. The little squad instantly rose to their feet with the hand to the cap. "Good evening, boys," said the Father, with one of his pleasant smiles, and hurried towards the hospital. "There he goes," said one of the group, "he's always where he can do good, and niver idle. The likes iv him, God bless him, is not to be found betwixt here and the giant's causeway." " Thrue for ye, Tim, by gorra; his match coud'nt be found iv ye thraveled from Dan to Barsheeba," said his comrade. "He'll be sayin his bades among the stars, whin many of his callin' will be huntin' a dhrop of wather in a very hot climate." This last remark was received with a hearty acquiescence by the entire group. Rough and witty as it was, it expressed the feelings of the soldiers for their Chaplain."
When he announced in late 1864 that he would be returning to Notre Dame, the soldiers sent a petition to Fr. Cooney's superior at Notre Dame, begging him to be allowed to stay with them.
You'll get to read more about Fr. Cooney - including a good amount of archival material - in my forthcoming book, Notre Dame in the Civil War: Marching Onward to Victory (The History Press, late 2010)!
Posted by Jim Schmidt at 9:17 AM