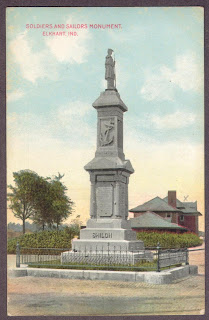 The University of Notre Dame gave freely of its priests, sisters, and students during the Civil War, and several ended up losing their lives in the cause.
As this week marks the anniversary of the Battle of Stone's River, it's a good time to write about a Notre Dame student who gave his "last full measure" during the war at the battle: Frank Baldwin.
Frank (Francis) Baldwin was a student for just one year at Notre Dame: 1860-61...he left school that spring - at only 16 - to join "Mulligan's Irish Brigade" (23rd Illinois Infantry); other Notre Dame boys had joined the unit as well. He was captured at the Battle of Lexington (Missouri), paroled, and sent back home to Elkhart, Indiana.
In November 1861, back at Elkhart, Frank - with his friends Norman Strong and C. W. Green - left Elkhart by train and boat and joined the 44th Indiana at Paducah, KY. He participated in the battles at Ft. Donelson, Ft. Henry, Shiloh, and Corinth.
On December 31, 1862, at Stone's River, the 44th was advanced too far and was flanked by the Confederates. Hearing the order to fall back, Frank Baldwin (now a 2nd Lt.) and Green, his constant companion, crossed a field where they were exposed to a "galling cross-fire."
As they reached a fence, Green thre his firearm over the obstruction and yelled to Baldwin to do the same. Green pressed on but never saw Frank Baldwin alive again. On the Saturday after the 3-day battle, Green took a detail of six men and found Frank Baldwin's lifeless form at the fence.
Twenty-seven year later, a handsome monument was dedicated to the Elkhart men who volunteered, fought, and died during the war. The monument was erected at the expense of Silas Baldwin, Frank's father, a leading man in Elkhart.
I'll post more information on the monument in the near future.
You can read more about young Frank Baldwin and other brave Notre Dame men at the Battle of Stone's River in my forthcoming book: Notre Dame in the Civil War: Marching Onward to Victory (The History Press, 2010).
Posted by Jim Schmidt at 8:46 AM