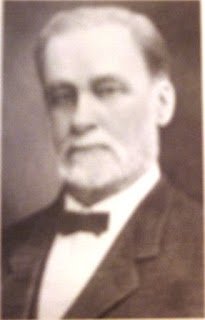 Several Notre Dame students enlisted in Union regiments at the outset of the Civil War. Of their record of service, one wartime student wrote, "Many of them became distinguished; many more took their place in the private ranks, content so that they did their duty well."

One of those student soldiers was Timothy E. Howard; one historian has referred to him as the "consummate Notre Dame man."

Howard was born on a farm at Northfield, Michigan, in1837, one of seven children born to parents that were natives of Ireland. He attended the University of Michigan and the University of Notre Dame, from which he graduated in 1862.

On February 5, 1862, he enlisted in the Twelfth Michigan Infantry, and two months later was severely wounded at Shiloh and disabled from further service.

Howard returned to South Bend and accepted a position with Notre Dame, having a distinguished career as a professor and as a lawyer.

Howard was also a poet, and published a small volume, Musings and Memories, in 1905. Among the poems in his collection was "Convalescent," in which he described the Battle of Shiloh, where he was wounded, and his recovery in the hospital:

Through the open hall door comes a balm to my pain;
For the fresh winds of morning are fanning my brain;
And hilarity, borne from the groups on the porch,
Tells the wounded and dying there's joy in the world;
As there will be while life has a spark in his torch,
Though ten thousand an hour were to Tartarus hurled.

Ah, now I can see them. Two sit on the step;
And one leans by a column; one plucks at the nep
That is growing beneath; and two, I am sure,
Are talking of home; their voice is so pure,
And so low, that no soldier could ever mistake;
Such tones the loved only and absent may wake.

And some are more boisterous, telling of fight,
And the way that we put the bold foemen to flight.
How their eyes are now flashing, those gallant young boys.
Hear great Indiana and grand Illinois,
Minnesota and Iowa, Kansas afar,
Ohio and Michigan, boasting of war.

And dark-haired Missouri, now joined in the fray,
With a twinkle in his eye, as he sits on the plinth,
Says, we nearly were granted and prenticed that Day
To the Southmen, with Beauregard, hot from Corinth.

So the brave, mellow lads while away the bright morn;
And their stories recounting, their deeds are new born
So they live the brave battle all over again,
Or whisper of firesides, for still they are men.

And I am better, too, at length.
Kind heaven daily gives me strength;
And now I long to tread the grass,
To look upon the trees and skies,
To jostle people as they pass,
And catch the friendship of their eyes.

Dear God, how long within this ward
I wait, where death still stands on guard;
Where still o'erhead, and down the stair,
The shuffling feet their burden bear,
— Some farmer boy that bravely died,
With kindly strangers at his side.

And I? Nay, then, I 'll not repine;
But pain shall still my soul refine;
Though long, so long, this cot I keep,
With bandaged wound, and feverish sleep,
And utter weakness, unto death—
The quivering eye, the feeble breath.

Yes, I am thankful. Maimed and dead
Have rested here, on many a bed;
But life and limb to me are spared,
And faithful hands for me have cared.
And now, this heaven-like morn of May,
Comes laughing life from death's decay;
While breath of flowers, and limpid air,
And songs of birds, my gladness share.

The lengthened miles before me lie,
Where the rushing train full soon shall hie.
And I shall walk the well-known street,
Where every sod my foot shall greet;
And I shall lift the dear old latch,
Where glistening eyes for me do watch;
And I shall stand in the open door,
Where welcome waits me, o'er and o'er.
Posted by Jim Schmidt at 9:59 AM